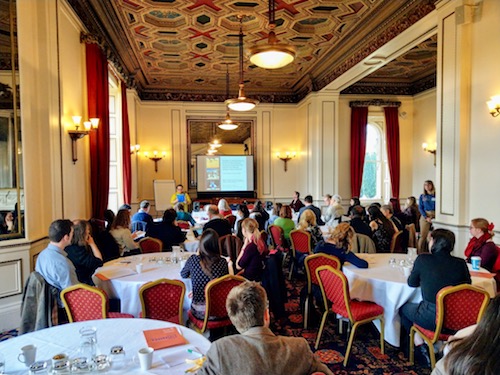 The theme of this year’s BFE One-Day Conference was Beyond Memory and Reconciliation: Music, Conflict and Social Manipulation in Post-Conflict Contexts. It was held at Keele University – where ethnomusicology has only recently become part of the Music curriculum – and organized very smoothly by Dr Fiorella Montero Diaz. The conference was highly international, with speakers travelling from France, Spain, Japan and the United States, as well as the UK.

This year was a highly enjoyable and informative conference which showcased some of the excellent research being done on music and conflict across the world. Equally, it served to highlight for this attendee the enormous challenges that ethnomusicologists face in seeking to address the often desperate, fragile situations conflict leaves behind, and keep up with the frighteningly complex new forms that conflict can take.

The impetus for focusing on conflict and post-conflict from an ethnomusicological standpoint is very clear: we have long observed music’s use as a means of processing grief, for coming to terms with otherwise inexpressible experiences of social breakdown, and for trying to heal divides and get along together after conflict. More recent research has also highlighted music’s role in driving conflict and constructing out-group enemies. Yet this is also an area of study whose comparative absence from the literature has historically frustrated some ethnomusicologists, so it’s heartening to see how much new research is being carried out on music, conflict and post-conflict. 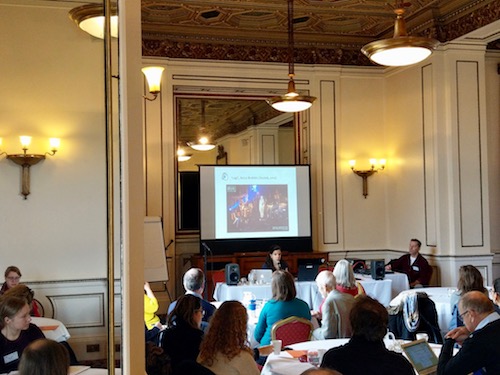 The day opened with a panel on “Musical nostalgias and nationalisms in conflict and post-conflict”. Violeta Ruano (Independent Scholar) spoke about musical creativity as a means of constructing national identity in the Saharawi diaspora, in an ongoing ceasefire which had left Saharawi in a state of uncertainty. Marta Amico (University of Rennes 2) then gave a detailed paper on the ways that Tuareg groups in urban Mali perform nostalgia for nomadic desert life. In the context of a conflict involving the Malian state and Saharan nomadic peoples, such performances allowed Tuareg to construct a community which resisted the frames of the national state. Finally, Eric Schmidt (Boston University) talked about his research in Niger, where the government sought to promote “ethnopreneurialism” and a “culture of peace” through an annual festival that presented nomadic forms of cultural expression to international tourists. It will be apparent that the papers of this panel were related in multiple ways – most notably through the common connection to the Sahara, but also with the underlying themes of mobility and marginality at the edges of state influence. 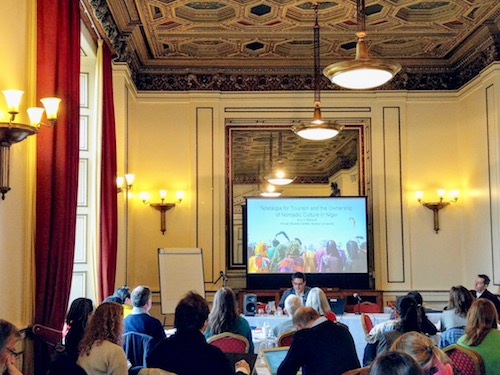 Panel 2, “Music Interventions in Post-Traumatic Contexts”, contained reflections both on applied ethnomusicology into post-conflict and on social research that drew ethnomusicologists uncomfortably close to conflict. Maya Youssef (SOAS, University of London) talked about her applied work with Syrian child refugees in Europe; she was followed by Yasuko Harada (Tokyo University of the Arts), who presented a critical perspective on musical interventions into conflict in Acholiland, Uganda. Hettie Malcomson (University of Southampton) concluded the panel by discussing rappers hired to write music for Mexican drug cartels. These scholars had wrestled with thorny methodological issues resulting from proximity to conflict. Youssef talked about her project to use music to help Syrian refugee children in Europe with post-traumatic stress disorder. Here practical challenges emerged relating to child-specific triggers for trauma. Malcomson’s research had, for a time, drawn her into dangerous territory, into a position of reliance on musicians deeply involved in cartel activities. These challenges pointed to a conclusion elaborated more directly during the evening session – that ethnomusicological interventions into situations of conflict or post-conflict are only likely to be effective if they pay attention to the distinct experiences of particular groups and individuals. 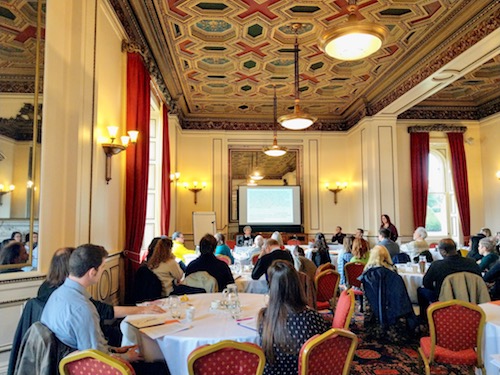 The day’s third session was entitled “The Role of Music in Conflict and Post-Conflict Societies”. Kelso Molloy (New York University) looked at the ways that Roger Waters has adapted live performances of the album The Wall to new political contexts – from the fall of the Berlin Wall to the emergence of far-right politics in the present-day United States. Maria Rijo Lopes da Cunha (SOAS, University of London) provided an in-depth focus on one song, “Autism” by Mustafa Said, which “noisified” contemporary Lebanese music and, Lopes da Cunha argued, subverted traditional notions of state and nation in the process. Focusing on a venue rather than a piece, Stephen Millar (Cardiff University) spoke about The Rock in Belfast, a centre for republican “rebel music” used to cultivate identities of resistance and construct a sense of (unified) Irish nationhood. As Millar told us, this venue has found itself the target of attacks from across the sectarian divide, including an attempting bombing. Ariana Phillips-Hutton (University of Cambridge) concluded the panel on a more theoretical note, focusing on the aesthetics of testimonies about conflict – and prompting critical discussion on the role of empathy in motivating ethical action. 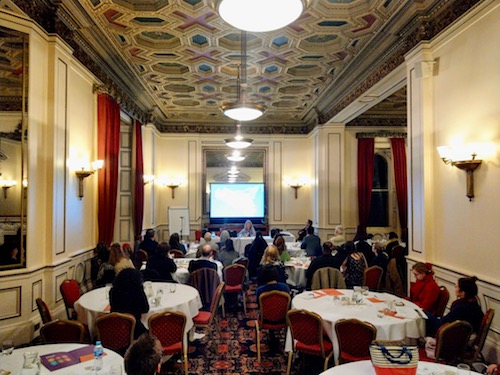 An ongoing point of debate is the use of music to commemorate victims of conflict and come to terms with traumatic histories. This was the subject of two of the contributors to the keynote roundtable at the end of the day. John Morgan O’Connell’s (Cardiff University) paper analysed a contemporary musical commemoration of the Gallipoli campaign sponsored by the Turkish Navy, based on a folk song, “Çanakkale Türküsü”. These performances constructed both a sense of unison and presented navy members as “regular Turks”. Yet ultimately, O’Connell concluded that such performances were rather duplicitous: they used musically presented reconciliation to conceal resurgent nationalism and dissimulate dissent within present-day Turkish society. Commemorations are especially complicated when one’s own community is identified as the perpetrator of atrocities. Felicity Laurence (Newcastle University) spoke about her role in a musical commemoration of the Holocaust in a small town in Germany in the 1990s. They recreated Brundibár, a children’s opera written in 1930s Czechoslovakia whose creators, along with most children performing in it, were sent to a concentration camp in Terezín; many were subsequently murdered in Auschwitz, including composer Hans Krása. The recreation represented an attempt to cope with a horrific past in a constructive fashion sensitive to the needs of the present. 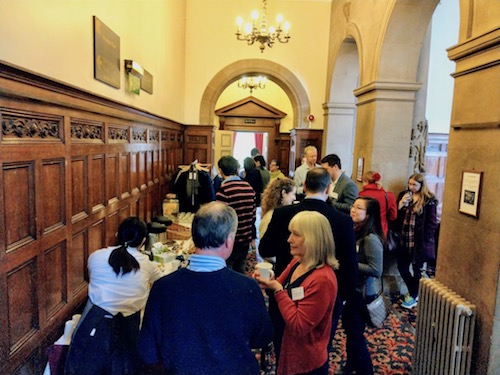 Discussed during the morning session, and referenced during the evening, was the creation of a series of European military bases in the Sahara – something which could be interpreted as a new European frontier within Africa. In recent years refugees fleeing conflict in the Middle East and North Africa have been used by the far right in Europe in order to gain a political foothold, even as European governments’ hostility to refugees has been reflected in, for example, repeated instances of European coast guards opening fire upon refugee boats in the Mediterranean. This formed the background for the roundtable talk given by Rachel Beckles-Willson (Royal Holloway, University of London). Discussing an applied recording project with refugees on the island of Sicily, Beckles-Willson showed us how WhatsApp had been used not only to co-ordinate these activities, but to allow participants to openly express their feelings about this process. It was yet another example of meeting survivors of conflict on their own terms: in this case, by embracing individuals’ “cyborg” status, and moving beyond popular notions of technological alienation. 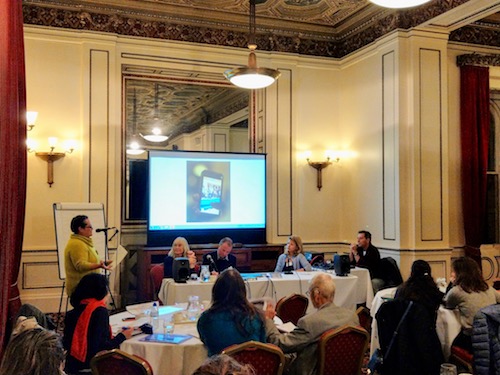 Throughout the day, the temporality of conflict was a recurring theme. There’s certainly a need to move beyond temporally bound notions of “conflict” and “post-conflict” in a world in which cruelty has become increasingly normalized. While it’s very difficult to keep research up to date with recent political developments, the recent year has been full of instances of apparent “post-conflict” driving new conflict: during the conference a caravan of refugees fleeing Central America was making its way through Mexico, something that was leapt on by the US President to send the military to the US-Mexico border in an act of apparent political opportunism. Indeed, I also attended the conference thinking about recent news relevant to questions about “pre-conflict”. October’s report by the Intercontinental Panel on Climate Change concluded that dramatic action is needed in the next 12 years to mitigate the worst effects of global warming: flooding, more extreme weather events, and collapses in the food and water supply almost guaranteed to drive a long period of conflict over resources. The grief felt at the corresponding rapid disappearance of global biodiversity may be negotiated and expressed by participating in music, but we are also aware of contexts in which emotion itself is codified or expressed in musical dialogue with the natural world.

The ecocide brought upon by human overconsumption and (corporate) exploitation of our surroundings perhaps ought to broaden our definition of conflict: this is a violent process, but its long-term victims don’t yet exist, and its immediate victims are apparently voiceless creatures excluded from definitions of the term ‘music’ which are normative within our discipline. Well, there’s enough ethnomusicological literature that can tell us this: creatures under threat are only voiceless if we choose not to listen to them.

Andrew Green is Leverhulme Early Career Fellow in the University of Glasgow’s School of Culture and Creative Arts. His research focuses on music, politics and social change in Mexico.