The symposium “Queerness, Voice, Embodiment” took place from 20th to 21st April 2018 at Maynooth University, Ireland. It was the second annual symposium of the LGBTQ+ Music Study Group, an organization established in 2016 to bring together scholars of different disciplinary and sub-disciplinary backgrounds interested in music, gender and sexuality. In line with the Study Group’s ethos, the event set out to elicit current queer and feminist perspectives on musical performance, particularly the voice, with a desire to nurture approaches informed by notions of embodiment, theories of intersectionality, and critiques of neoliberalism. Through a range of formats – including a keynote lecture, roundtable discussions, presentations, and invited themed panels – the symposium raised broader issues of local and global LGBTQ+ politics as well as pressing issues of diversity and wellbeing in contemporary higher education.

The symposium began on the Friday morning with a welcome by the chair and lead organizer Danielle Sofer (Maynooth University). This was immediately followed by a discussion about safe spaces by the Study Group chair Thomas R. Hilder (Norwegian University of Science and Technology, Trondheim) and a 30-minute “speed-networking” exercise, whereby participants briefly introduces themselves to as many other people in the room. 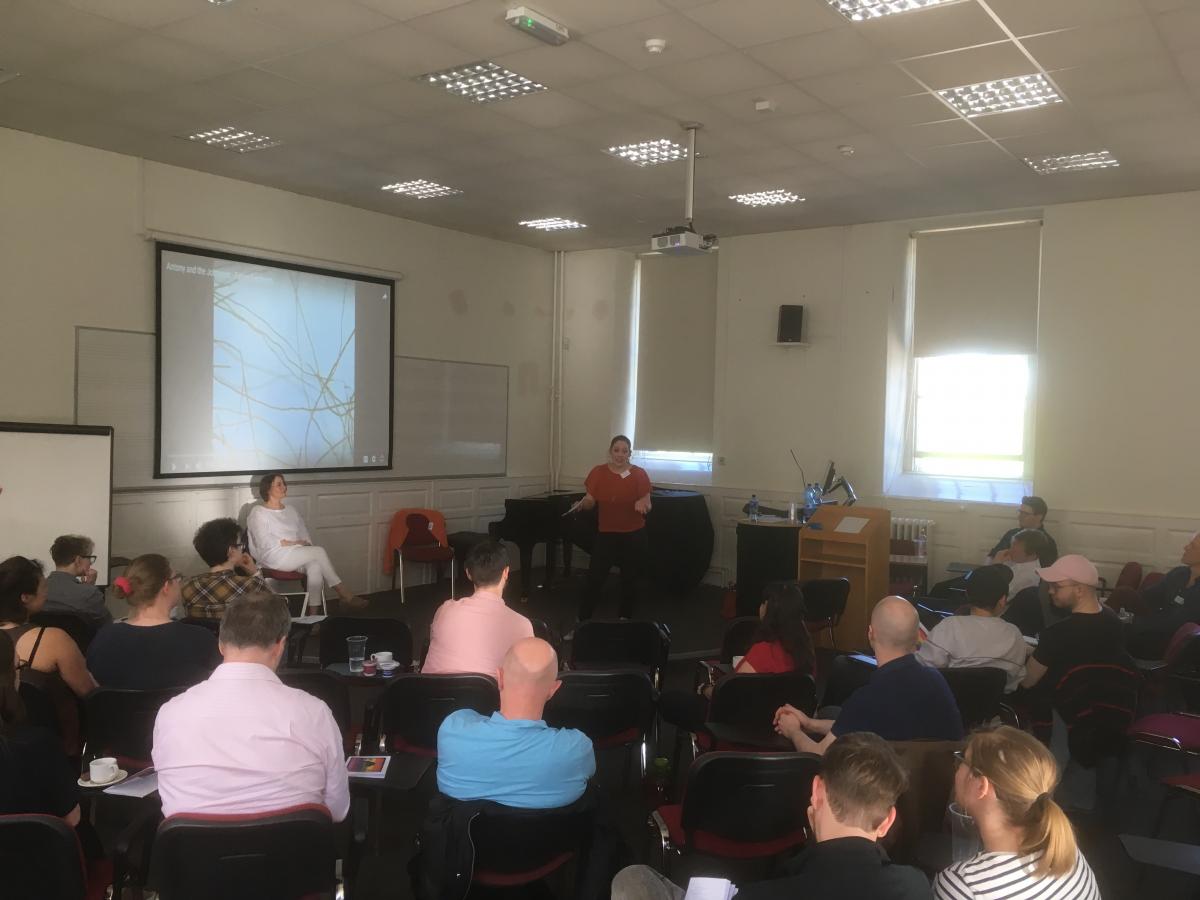 The academic rigour and critical poise of the symposium was set by the keynote speaker, Liam Lillis Ó Laoire (NUI Galway). His paper “Thinking about Race with Traditional Irish Song” beautifully weaved together reflections on whiteness, gender and sexuality through inspecting canonical Irish folk music in contemporary, multi-ethnic and postcolonial Ireland. Further explorations of gender, sexuality and ethnicity in Irish contexts were offered through an invited panel on the second day. Here, Moynagh Sullivan (Maynooth University) examined Irish national identity by critiquing the received hetero-patriarchal cannon of Irish-British pop stars and posited alternative feminist and queer lineages. Her fellow panellist, the cabaret and burlesque performer Shir Madness offered an eloquent critique of cultural appropriation in burlesque performance by drawing on her own experiences as a postcolonial Irish citizen.

Intersections of gender, sexuality and coloniality were also addressed in several other presentations, including a study of queer Cuban dancing bodies by Moshe Morad (Tel Aviv University) and an analysis of the South African queer artist of colour Umlilo by Ernst van der Wal (Stellenbosch University/Humboldt University of Berlin). Chris Stover’s (Arizona State University) presentation on the composer-improviser-activist Sun Ra, and the organised panel on falsetto, countertenors and male sopranos by Michael Arshagouni, Robert Crowe and Morgan Crowley drawing on their work as musicologists and performers, explicitly explored the voice. The theme of embodiment was explored in different guises, through a study of lip-syncing in RuPaul’s Drag Race by Manuel Pinto (University of Groeningen), reflections on gendering in ballet education in the UK by Jonathan Still (UCL Institute of Education), and an analysis of the composition, performance and reception of the works by the US composer Harry Partch by John Hails (Edinburgh Napier University).

Meanwhile, issues of queer subjectivities was the focus of Marion Wasserbauer’s (University of Antwerp) presentation of her beautiful oral history project “Queer Voices”, which involved interviews with queer-identifying people in Belgium and discussions of their musical tastes and personal biographies. Ethnographic methods also informed the work of David Buschmann (University of Bern), who presented on issues of safe spaces in Berlin queer clubs. Several presenters offered analyses of queer identifying artists, such as the US pop star Annie Clarke by Megan Rogerson-Berry (Waikato Institute of Technology, Hamilton), and the US organist Cameron Carpenter by Laura Wahlfors (Sibelius Academy). To compliment, Magdalena Fürnkrantz (University of Music and Performing Arts Vienna) uncovered new perspectives on jazz musicians of the Harlem renaissance, and Mark Fitzgerald (DIT Conservatory of Music and Drama) offered a reassessment of twentieth century Irish composers, continuing a tradition within queer approaches to reveal hidden LGBT histories. Other presentations included a model for queer listenings of J.S. Bach by Nick Bonadies (Guildhall School of Music and Drama), an analysis of film music in Derek Jarman’s Edward II by Richard Piatak (University of Huddersfield), and the preliminary ideas for a project on social networking amongst LGBT musicians by Pam Burnard (University of Cambridge). 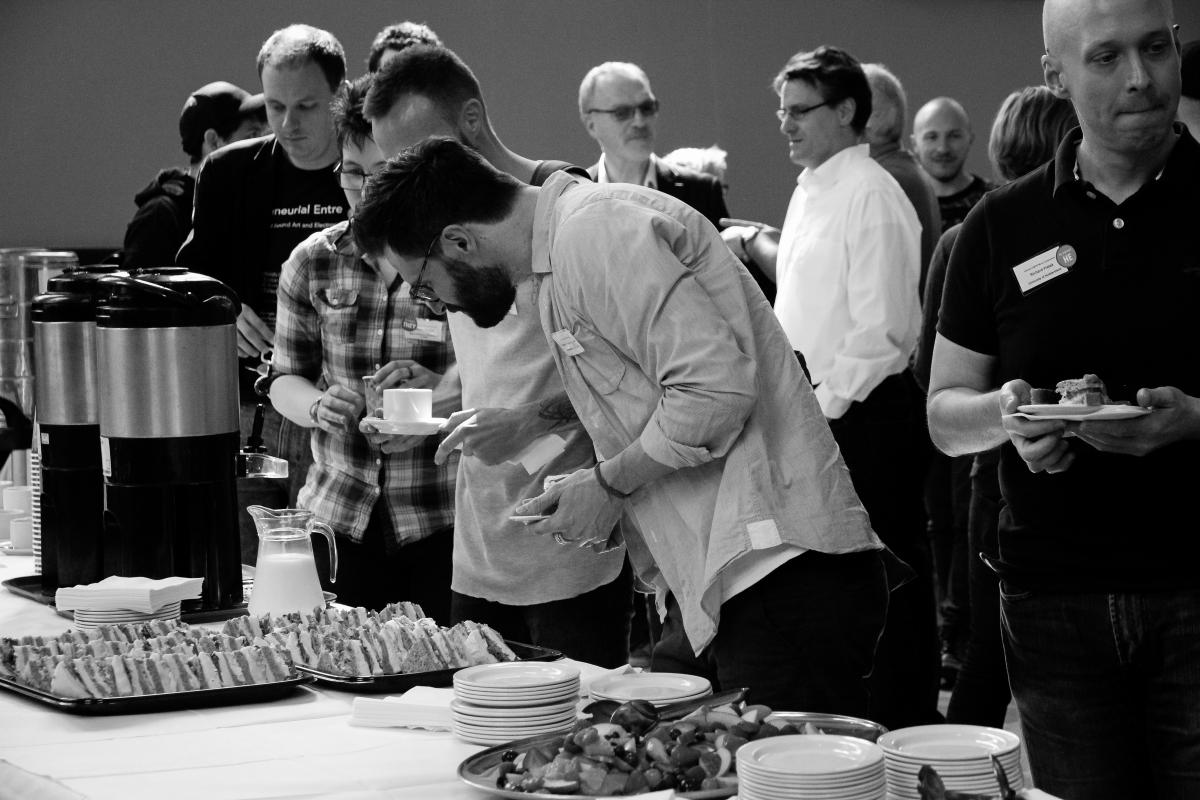 Another key focus of the symposium was issues of health and wellbeing. This was addressed in a roundtable on mental health in higher education which featured the speakers John Hails, Annie Hanlon (Dundalk Institute of Technology), Sarah Hawes (Maynooth University), Christopher Morris (Maynooth University), and Aoife Fennel (Maynooth University). Drawing on their experiences as students, lecturers, heads of department, and welfare and equality officers, the speakers offered their own insights into, and strategies for dealing with the marked rise in mental health issues amongst students and staff in music departments. As Annie Hanlon reminded us, levels of depression, anxiety, self-harm and suicide are higher among LGBTQ people, and the panellists urged for greater awareness and the implementation of new policies at universities. Such issues were a stark reminder of one of the main aims of the Study Group, to create a support network for LGBTQ identifying students, scholars and musicians and to provide a forum for issues of diversity and inclusion in the academy.

Overall, the symposium was a huge success. Participants hailed from numerous countries – including South Africa, Belgium, New Zealand, Finland, the USA, Austria, Israel, the Netherlands, Germany, Norway, Ireland and the UK – demonstrating the growth in interest in issues of music, gender and sexuality, and the expansion of the Study Group network. The careful curation of the event by the programme committee, especially the host Danielle Sofer, created a supportive and jovial atmosphere, promoted critical scholarship and discussions, and engendered a strong sense of politics. Through the diverse participants, contributions and formats, the symposium continued the Study Group’s role as an academic forum with activist and outreach aspirations. The Study Group committee would like to thank all the student helpers and our funders, including the British Forum for Ethnomusicology, the Royal Musical Association, the Society for Musicology in Ireland and Maynooth University. 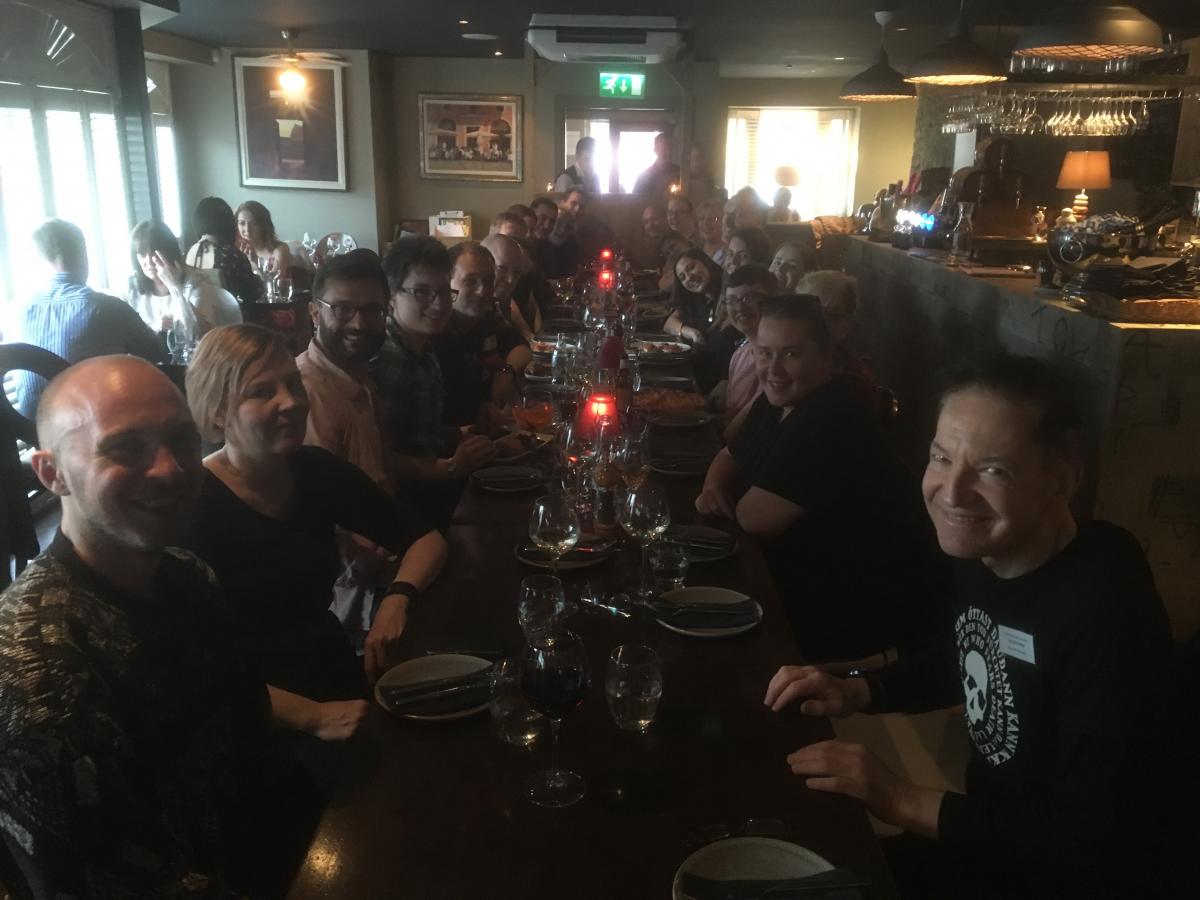 Participants at the symposium were shocked and saddened to hear of the death of David Buschmann just weeks after having presented at the event. David had recently completed his MA in Graz, Austria, and was just beginning a PhD in Bern, Switzerland. The Study Group offers our sincere condolences to his family and friends.