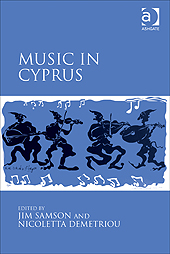 Music in Cyprus draws its authors from both sides of the divided island to give a rounded picture of musical culture from the beginning of the British colonial period (1878-1960) until today. The book crosses conventional scholarly divides between musicology and ethnomusicology in order to achieve a panorama of music, culture and politics. It is the first book to consider the different kinds of music found in Cyprus, and the first one to include Greek Cypriot, Turkish Cypriot, and international scholars.