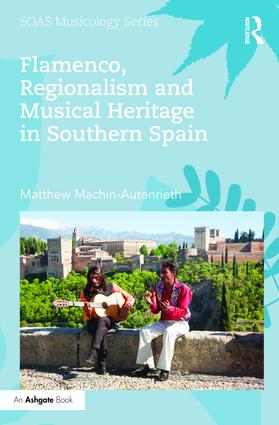 Flamenco, Regionalism and Musical Heritage in Southern Spain explores the relationship between regional identity politics and flamenco in Andalusia, the southernmost autonomous community of Spain.

In recent years, the Andalusian Government has embarked on an ambitious project aimed at developing flamenco as a symbol of regional identity. In 2010, flamenco was recognised as an Intangible Cultural Heritage of Humanity by UNESCO, a declaration that has reinvigorated institutional support for the tradition. The book draws upon ethnomusicology, political geography and heritage studies to analyse the regionalisation of flamenco within the frame of Spanish politics, while considering responses among Andalusians to these institutional measures.

Drawing upon ethnographic research conducted online and in Andalusia, the book examines critically the institutional development of flamenco, challenging a fixed reading of the relationship between flamenco and regionalism. The book offers alternative readings of regionalism, exploring the ways in which competing localisms and disputed identities contribute to a fresh understanding of the flamenco tradition. Matthew Machin-Autenrieth makes a significant contribution to flamenco scholarship in particular and to the study of music, regionalism and heritage in general.

For a short overview of the book, see the University of Cambridge's research feature: http://www.cam.ac.uk/research/features/flamenco-what-happens-when-a-grassroots-musical-genre-becomes-a-marker-of-culture

Matthew Machin-Autenrieth is a Leverhulme Early Career Fellow at the Faculty of Music, University of Cambridge, UK. He graduated with a Ph.D. in Ethnomusicology from the School of Music, Cardiff University in 2013. His research concerns flamenco, regionalism, politics and multiculturalism in Southern Spain.