The BFE Student Prize for 2018 recognises an outstanding paper presented by a student at this year’s BFE Annual Conference, hosted by the University of Newcastle, 12-15 April 2018. We are delighted to award the prize to Katie Young (Royal Holloway, University of London) whose paper is described below. We would also like to thank everyone who submitted a paper this year, and all BFE student members are encouraged to submit papers for next year’s conference at the University of Aberdeen in 2019. 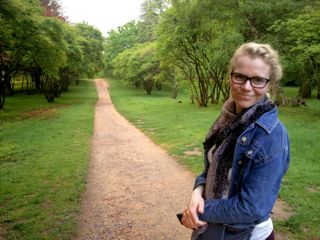 Katie Young – ‘“If You Know Arabic, Indian Songs Are Easy For You”: Hindi Film Songs and the mawlid in Tamale, Northern Ghana.’

This very well researched ethnographic paper provides fascinating insights into memory and pedagogy in Hindi film reception in cinema halls post-1957 by African Muslim audiences in Tamale, Northern Ghana. Young examines how modes of listening learned in Qur’anic schools have affected active response to Hindi film in terms of audition and recitation.  The memorisation of both Arabic religious texts and Hindi songs are revealed to have meanings not associated directly with context but rather with the act of sounding and re-sounding these texts. Young’s original primary research undertaken in 2016 and 2017 on the adaptation of Hindi song melodies in Tamale’s Islamic schools demonstrates how mawlid praises in Arabic have been set to well known Hindi film songs, a practice her interviewees describe as natural due to the similarities of the two non-native languages and the timbral and decorative vocal styles of both the call to prayer and Hindi film song performance.

Young makes a powerful contribution to a range of fields including the study of Islam, linguistics, music learning, (post)colonialism, and South-South cultural flows. Most importantly, through this paper Katie Young suggests an innovative approach to ‘listening’ that combines pedagogy with pleasure and religious doctrine with popular culture, in ways that challenge longstanding boundaries within our research fields. The original and imaginative paper brings together a thorough historical account with lively first-hand descriptions, also supported by very illustrative audio-visual extracts.

This paper makes a valuable contribution to the discipline, and is a pleasure to read.