BFE Member Dr Henry Johnson has recently co-edited with Ian Chapman a ground-breaking volume entitled 'Global Glam and Popular Music: Style and Spectacle from the 1970s to the 2000s'. Published by Routledge and featuring chapters by diverse music researchers covering Glam scenes across the globe, this book offers a truly international perspective on the inception, development and spread of Glam in its many different cultural manifestations. The editors write: 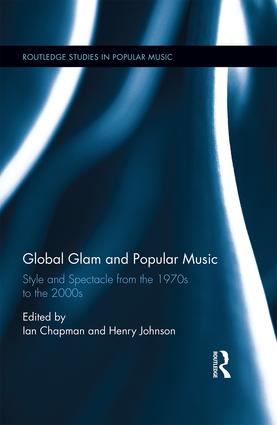 "Approaching glam music performance and style broadly, and using the glam/glitter rock genre of the early 1970s as a foundation for case studies and comparisons, the volume engages with subjects that help in defining the glam phenomenon in its many manifestations and contexts. Glam rock, in its original, term-defining inception, had its birth in the UK in 1970/71, and featured at its forefront acts such as David Bowie, T. Rex, Slade, and Roxy Music. Termed "glitter rock" in the US, stateside artists included Alice Cooper, Suzi Quatro, The New York Dolls, and Kiss. In a global context, glam is represented in many other cultures, where the influences of early glam rock can be seen clearly. In this book, glam exists at the intersections of glam rock and other styles (e.g., punk, metal, disco, goth). Its performers are characterized by their flamboyant and theatrical appearance (clothes, costumes, makeup, hairstyles), they often challenge gender stereotypes and sexuality (androgyny), and they create spectacle in popular music performance, fandom, and fashion. The essays in this collection comprise theoretically-informed contributions that address the diversity of the world’s popular music via artists, bands, and movements, with special attention given to the ways glam has been influential not only as a music genre, but also in fashion, design, and other visual culture."

'Global Glam and Popular Music: Style and Spectacle from the 1970s to the 2000s' can be purchased from the Routledge website (click on the link below) where more information regarding the volume is also available:
https://www.routledge.com/Global-Glam-and-Popular-Music-Style-and-Spectacle-from-the-1970s-to-the/Chapman-Johnson/p/book/9781138821767