Communal spirit and interdisciplinary discussions were abundant at this year’s BFE/RMA Research Students’ Conference, held at the University of Sheffield From January 10 to 12. The three days were framed by the BFE keynote lecture by Prof. Laudan Nooshin (City, University of London) on diversity and disciplinary identities in the study of music. She presented the progress our field has made in considering diversity as well as the steps still needed for university music departments and research to be more inclusive. Part of this has involved acknowledging the complexity of music and our different relations to it, which has lead to the creation of many sub-disciplines to accommodate the more focused creation of research frameworks and forums. What Nooshin left us with, amongst many valuable lessons and perspectives, was the encouragement to continue unified and interdisciplinary discussions while we forge these new avenues for research. 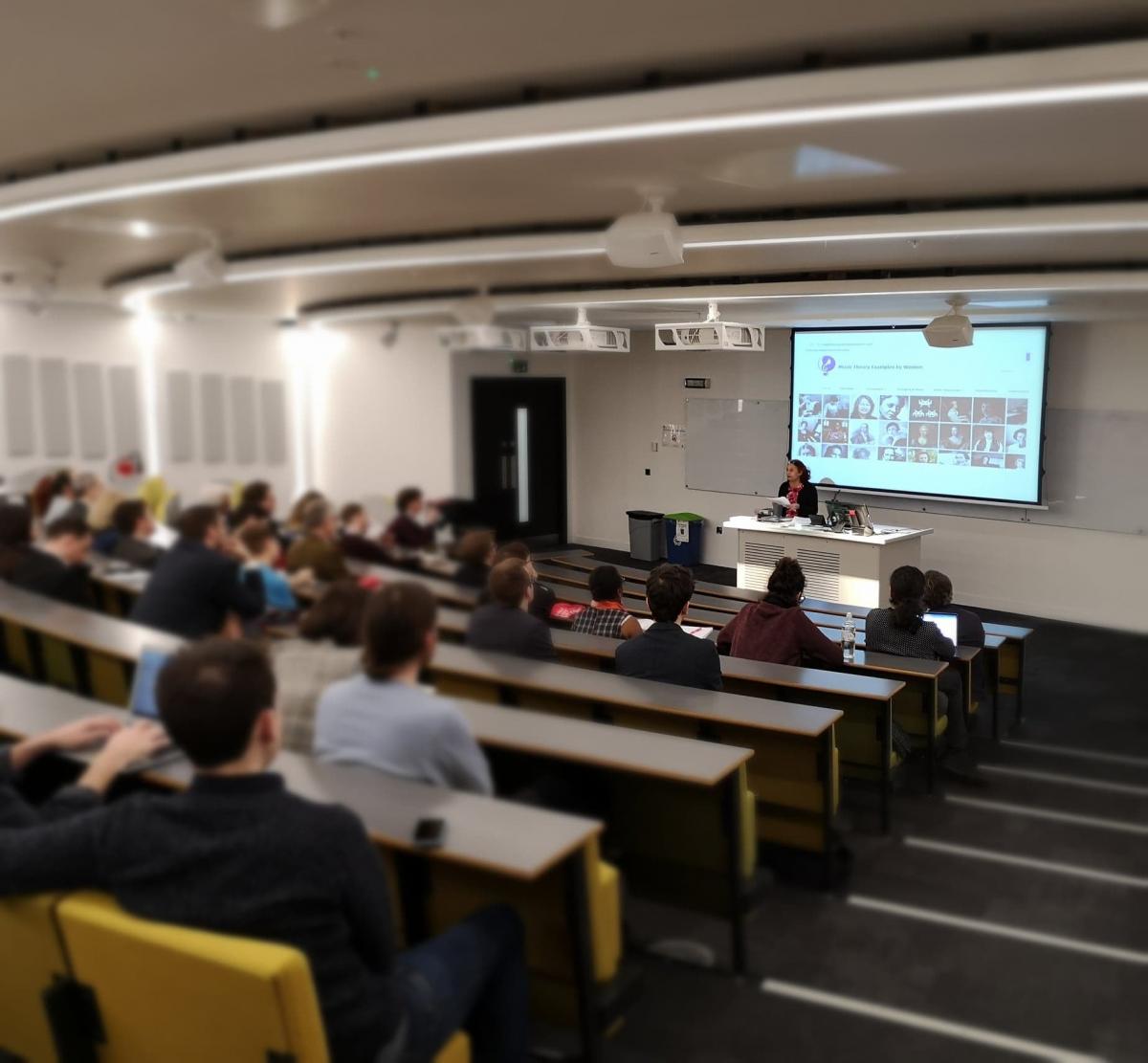 The importance of this was evident at the conference with such a diverse range of papers allowing many presenters and attendees to be equals in talking outside their areas of expertise and thus finding common ground and forging links. Indeed, a sense of community was partly facilitated by the camaraderie of students from Sheffield (some of whom lead a folk session at the University Arms on the Friday night) as well as those who had met at previous conferences, with several presenters coming from Huddersfield (BFE/RMA Student Conference 2018) and Liverpool (RMA 2017). Additionally, creative and participatory workshops were offered by Musicians in Residence at the University of Sheffield. These included composition workshops with members of the Ligeti and Gildas quartets and a world music workshop led by John Ball that gave participants a chance to play the tabla and learn musical terminology from across India. 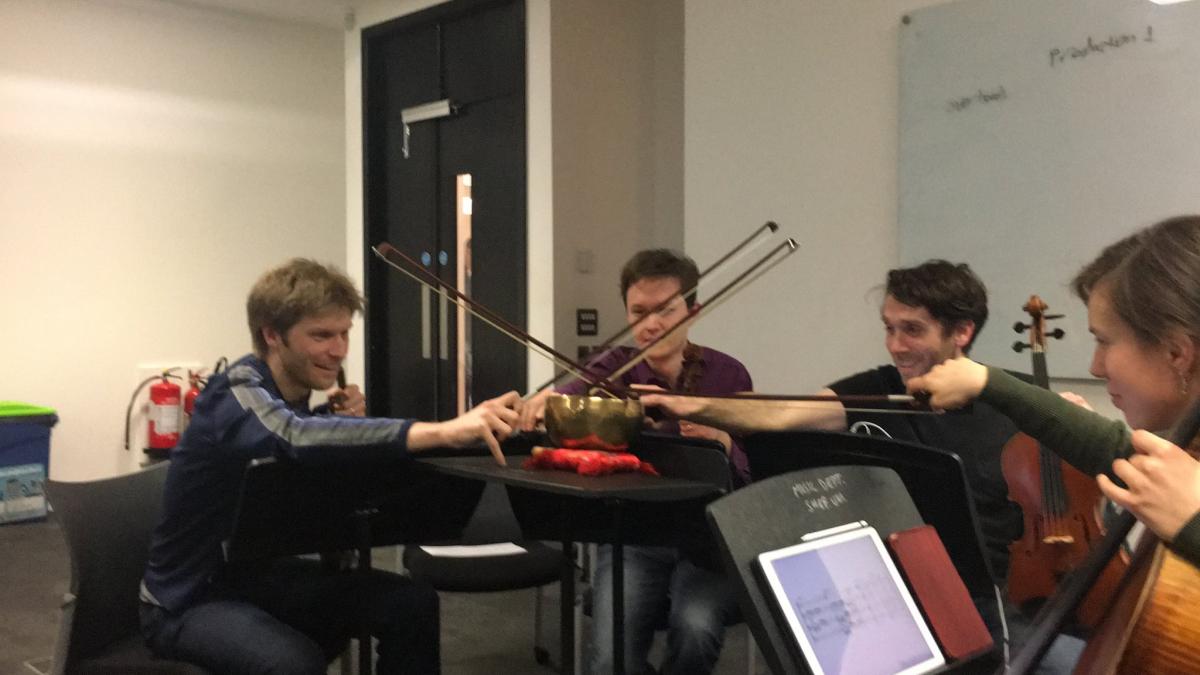 Members of the Ligeti Quartet and the Gildas Quartet rehearsing a composition by Tom Crathorne (University of Sheffield). Crathorne's piece uses a Tibetan temple bell activated by the bows of the string players. Photo courtesy of the Centre for New Music at Sheffield.

Many of the research presentations questioned not just music, but the systems by which we understand it when we listen and when we conduct research. Both Will Finch (University of Bristol) and Eleanor Smith (University of Huddersfield) presented papers on screen music that showed its ability to curate how we view real-world subjects. Finch examined how the smooth repetition of noisy field recordings over changing clips of animals and the use of electro-jazz over segments about the human impact on nature and indigenous communities in a 1990 BBC Arena’s “Lifepulse: A Natural Thriller” documentary distance the viewer from the reality of the subject at hand. In contrast, Smith analysed musical techniques used in the 2002 movie The Magdalene Sisters that remove this distance. She demonstrated how the film used exaggerated sound effects and traditional Irish folk tunes to frame the harrowing experience of women in the Magdalene Laundries and create a discomforting sense of immediacy.

While these papers showed how music and sound mediate what we watch, Jonathan Higgins’ (City, University of London) paper investigated how the noise of old recording and playback technology mediates our understanding of music itself. His recent electroacoustic composition, “Faking the Past,” uses the mechanical sounds of obsolete technologies to play on listeners’ nostalgia (whether first- or second-hand) for an imperfect-sounding past.

Two notable studies uncovered the inner-workings of award systems and showcased the importance of context when discussing current and historical markers of musical credibility. Joyce Tang’s (University of Southampton) investigation of international piano exhibitions from 1880 to 1894 showed that representation of different nations varied substantially between exhibitions and the piano manufacturers argued over the purpose and set-up of competitions. Emma-Jayne Reekie (University of Liverpool) showed how, in the face of declining sales and rising independent labels in the US, major record labels formed the National Academy of Recording Arts and Sciences and the Grammy Awards in the 1950s whereby they gave themselves credibility and successfully regained the market. 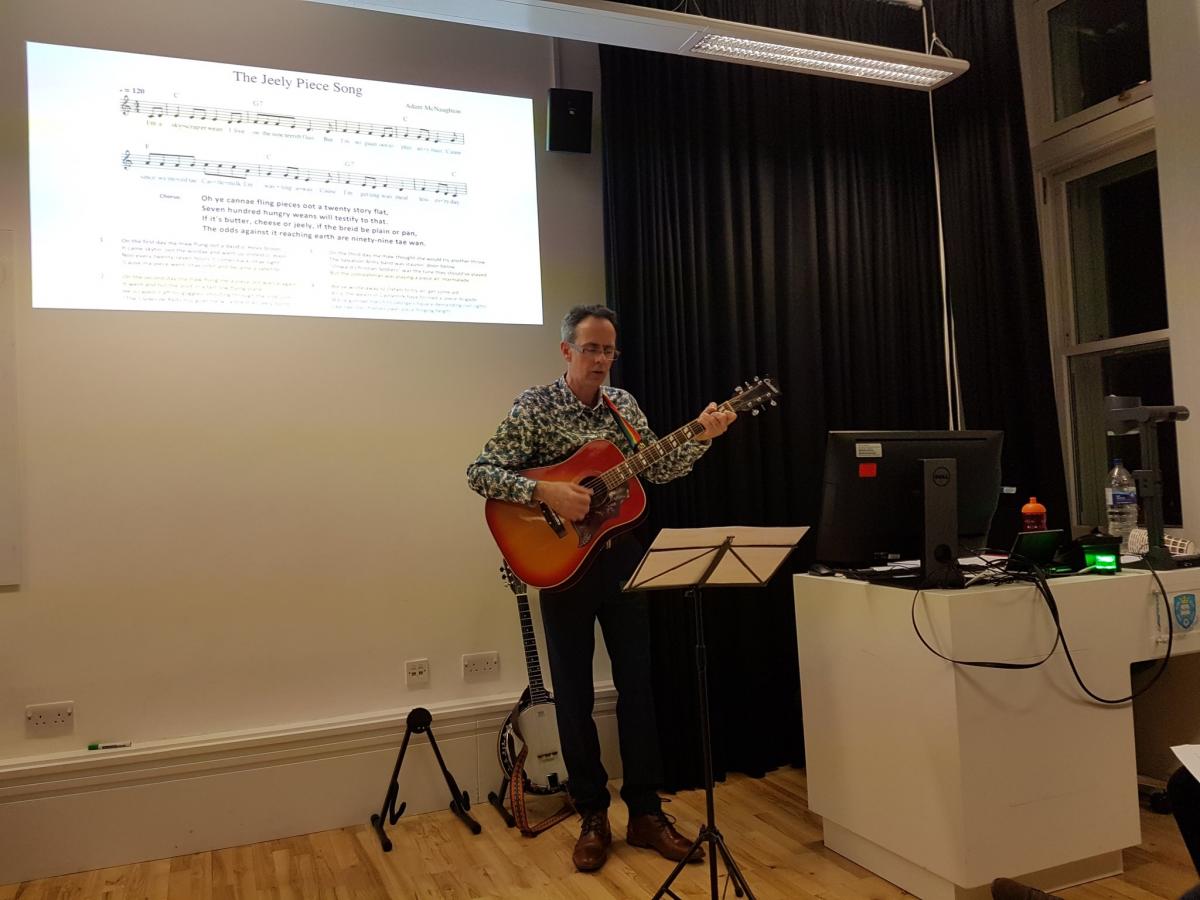 Stuart Young (University of Sheffield) presenting his research on the Paisley Folk Song Club and its relevance to the Scottish Folk Revival. Photo by Michael Walsh.

Dr. Yvonne Liao’s (University of Oxford) RMA keynote lecture touched on the ways in which research frameworks can unintentionally narrow the understanding of our subject. In her investigation of the colonial promotion of Bach in Hong Kong, she revealed that continued local interest and reinterpretation complicate perceptions and definitions of colonialism and post-colonialism. She also argued for a reconsideration of how we understand Europe, “after-Europe,” and the classical music canon in a global context. Yuemin He (Newcastle University) similarly demonstrated the importance and benefit of a global context when presenting her research on the 1667 Chinese publication Collection of Elegance (a canonic female compiled collection of songs by women). Her detailed study provided rich examples of gender- and class-diverse music and lyrical compositions and stories.

This year’s BFE/RMA Research Student Conference has prompted us to reflect on our responsibility, as upcoming music researchers and educators, to develop ways of communicating across an increasingly open and diverse field. This is a continuing process that requires constant thoughtful and critical discussions. Congratulations to the organisers of this year’s conference at the University of Sheffield for successfully creating a respectful forum in which to have these conversations. I hope this discourse continues to build at next year’s conference at the Open University in Milton Keynes.

Many thanks to my University of Sheffield colleagues Alejandro Albornoz and Michael Walsh for their help in compiling this report.

Elsa Marshall is a PhD Music candidate at the University of Sheffield, researching the cinematic production practices of the 1954 MGM musical Seven Brides for Seven Brothers under the supervision of Dr. Dominic McHugh.